Our interviews with the cast of Season 2 King of the Nerds contestants continues with Zack.  Zack is one that from the start captures your attention and it’s no surprise he is the leader of the yellow group; Midas Touch Attack.  We love Zack in this house because of his passion.  So many ups and downs and excitement on a grand scale. 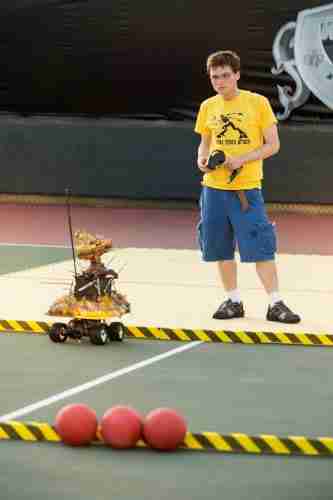 We can’t imagine what this show would be like without him and sincerely hope he comes out strong all the way to the end.  So far he has proven himself a very worthy opponent having been in the nerd off 3 times and coming out a winner.  He has the other contestants in a bit of a worrisome position and he may just be able to win the whole game!

My daughter also just adores Zack and couldn’t wait to get his answers to her interview back.  Check out Zack’s answers to Brenna’s questions:

1. How does it feel to be picked to be on King of the Nerds? When I learned I was going to be on King of the Nerds I was ecstatic! After seeing the first season, I knew I needed to be there and I wanted my shot for the crown.
2. Why do you think you will be “The King of the Nerds”? I think I can be King of the Nerds because I’m a writer and gamer. Last year, the people who made it the furthest were the hardcore gamer and writer so I think I have a pretty good chance to win with my skill set that includes both! I do have to say though, I think being King of the Nerds is about so much more than just winning a competition. Being King of the Nerds is about being your nerdy self and not being afraid to–it’s about passion and loving to do what you do. I think anyone can be King of the Nerds if they have that drive which makes nerds so special!
3. What is your favorite part of Nerdvana? My favorite part of Nerdvana itself is all the amazing nerdy loot all over the place! It really is Nerdvana–it has everything! Swords, robots, gaming rigs and an endless supply of every candy you could possibly want to eat! But the other thing I love about Nerdvana is what it represents. Nerds are driven people who accomplish amazing things, and I know that all of us (myself included) are going to do more awesome stuff and help shape the world. The revenge of the nerds has already arrived–the age of technology is our world and Nerdvana reminds me just what a wonderful world it could be!
4. What is your favorite cartoon? My favorite cartoon is probably either the Fairly Odd Parents, Invader Zim or Spongebob. Invader Zim is a masterwork of animation and if you haven’t seen it you need to check it out! My favorite anime is Buso Renkin.
5. What is your favorite food? My favorite food is tonkotsu ramen. I love pizza and Chinese food, but ramen always leaves me the happiest and fullest!
6. What is your job? Do you like it? Why or why not? Right now I’m a full time student studying English. I love it! I also write fantasy and science fiction novels.
7. What are your hobbies? When I’m not reading old manuscripts for college, I’m usually writing some of my own! My other big hobby is video gaming. I have a pretty impressive World of Warcraft resume and have been within the top players for my specialization. I also love to run. It’s a great way to burn off the fat in that tonkotsu ramen…!
8. What is your favorite animal? Do you have pets? My favorite animal is the triceratops. I consider this a valid answer despite them no longer walking among us. Besides, if they did, I think they’d cause traffic problems and win. It’d be scary. Anyway, yes, I have a pet. He’s an adorable miniature poodle named Inkspot!
9. Have you ever failed a test? Certainly not in college, though I believe I once received low marks on a middle school Spanish exam. It wasn’t a fail, but I remember it to this day.
10. Can you speak a different language? I’ve dabbled in Spanish but am not fluent. I’m currently learning American Sign Language. I’m having a lot of fun with it so far! I can also manage a mock form of World of Warcraft draconic if I need to. Lok ashj no x  enkil az orah zenn… like seriously, I can’t think of one time I’ve actually needed to speak the language of dragons in my life. If I ever do though, the circumstances would be so totally epic that it’d be worth the wait.
11. What were you for Halloween last year? I think I ended up changing costumes multiple times. The wizard hat you can find me wearing in the TBS promos for King of the Nerds was a part of a final fantasy black mage costume I’ve worn many times. I know a black mage is often considered the cosplay copout, but it’s a fun one! You get to have glowing eyes and a cloud of darkness for a face. 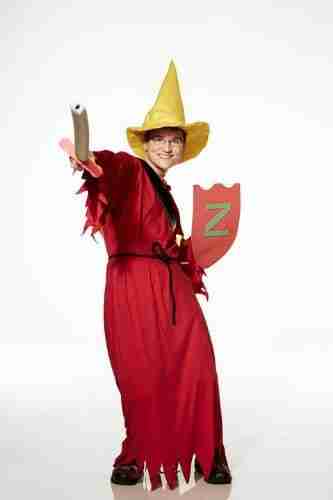 Zack from King of the Nerds Season 2
Photo: Jeremy Freeman

12. Do you play any sports? I play chess and count chess as a sport. Besides that though, I’m a runner. I’ve never been good at sports that involve catching or throwing with your arms. But I did show that I can be great at those under pressure on King of the Nerds during robot dodge ball! I have great aim, I just don’t have a lot of power to back my aim up. Somehow I managed to summon up the power I needed when it counted!
13. Who is your best friend in Nerdvana? Nicole and I get along well and have a lot in common. I’m also pretty close with Kelsey and Jack. My other best friend in the Nerdvana is Twilly, the adorable red moglin healer who you may spot in my pocket from the Adventure Quest online games. He’s my literal pocket healer–I brought him along to help keep my HP high so I could focus on DPS!
14. What advice do you have for young kids in school? I’ve had the privilege to hear from a number of people inspired by the show and who identify with me in particular. One of the big messages of King of the Nerds is that it’s not only okay to be yourself, but it’s awesome! Sometimes, especially when you’re the nerdy type, it can be hard to fit in, but keep being yourself and make people like you for who you are. Life is amazing and there’s so much to do! Be yourself, get out there, explore, do stuff, make things and don’t forget to be awesome!
Be sure to tune in tonight for the next episode of King of the Nerds on TBS at 10pm ET/PT!
Follow Zack on  Twitter