In last week’s installment of Wine on Wednesday, we learned about Chardonnay wine, and this week we will dive in to the world of Cabernet Sauvignon. 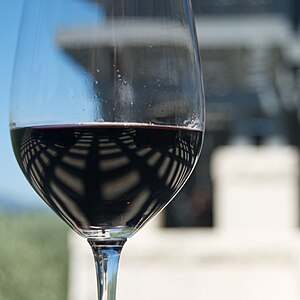 Before we begin our Wine on Wednesday discussion, let me preface by saying that wine, especially red wine varietals, can be complex wines, and to explain all of the nuances would probably mean writing a novel.  My goal with Wine on Wednesday is to provide the basics for understanding wine for those who may not have a lot of experience in wine tasting.  Hopefully this will inspire people to learn more about the complexities of wine as they search for a wine they love!

Cabernet Sauvignon is also a very well known and popular wine, and is grown in nearly every major wine producing country.  Cabernet Sauvignon originated in Bordeaux, but currently has a large production in California.

Cabernet Sauvignon, like many other red wine varietals, gets better with age (although there are some who disagree; read this article from The Daily Beast to learn more).  Aging wines means to allow it to remain bottled for a period of time before drinking.  Aging a wine will reduce the tannins and bring out the fruit and oak flavors, giving the wine a softer flavor.  Tannins in wine refers to the pucker you have in your mouth after tasting a wine.

Cabernet Sauvignon also has a distinct color, which is typically dark red or almost purple.  It’s a very rich color in comparison to lighter red wines like Pinot Noir or Merlot.  For more information on color and other characteristics of  Cabernet Sauvignon,  see this article from Wine Folly.

Food pairing is another important element of wine tasting.  The right foods paired with the right wines will enrich and enhance both the flavors of the food and the flavors in the wine.  I’ve often been amazed when the flavor of a wine completely changes after I pair it with a particular food.  Red wine, especially Cabernet Sauvignon, typically pairs well with richer foods, such as red meat, red sauces,  and heavier pasta dishes.  A great peppery Cabernet can pair fantastically with a spaghetti with meat sauce or even pizza!

Now that we have discussed some of the basics of Cabernet Sauvignon, will this be the wine you love?  If you prefer a richer flavor that may leave a bite on your tongue (remember the tannins!), and you like a more complex flavor, since Cabernet will typically balance the rich fruit flavors with vanilla, oak or spice, this may be a good choice for you.  If you aren’t as big on the smoky, oak flavors, this might be a good choice as well, as the oak flavors tend to be light with Cabernet (although there is a lot of variation to this among winemakers).  If you prefer sweeter wines, Cabernet is probably not the best choice for you. But if you’re a fan of sweeter wines and are longing to find a red wine you love, there are varietals of red wine that can be a little sweeter, and we’ll get to those later.

Remember, there are lots of variations in wine among winemakers, and even among the year in which the winemaker produced the wine, so try several different brands before deciding whether you love or hate Cabernet Sauvignon.

Here are a few of my favorite wine makers of Cabernet Sauvignon: