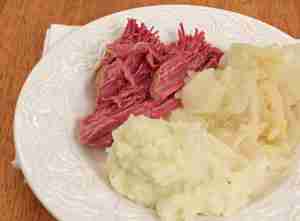 Are you wearing green?  Eating green food?  Irish food?  Drinking beer?  If so, just who are you celebrating?  I know I will be eating some corned beef and cabbage like that pictured above, but honestly more out of tradition than from celebrating the man St. Patrick.

Did St. Patrick drive the snakes out of Ireland?  Is he responsible for all partying going on in his name?  The answer is no and no.  In fact, there were probably never snakes in Ireland, and as for the partying, well, that is primarily an American thing.  In Ireland, St. Patrick’s Day is primarily a religious observance.

So, who was St. Patrick really?  St. Patrick was the son of a wealthy man in Britain, and was probably not very religious (though identified as Christian) until he was kidnapped and forced into slavery at the age of fifteen or sixteen.  During his slavery in Ireland, St. Patrick found his true religious nature.  After escaping, St. Patrick went through the religious training necessary to become a priest.  As a priest, St. Patrick returned to Ireland to minister to Christians there and to convert more people to Christianity.  And, his color, it was blue, not green.  Later, when green became the national color of Ireland, people began wearing green on St. Patrick’s Day.

So, is anything we associate with St. Patrick’s day the truth?  Apparently, St. Patrick did use the shamrock to teach about the Trinity, and hey, it is green.  And, he did die on March 17th in 460 or 461.