Memorial Day is often seen as an unofficial “Kickoff to Summer”, celebrated with parties and barbecues, and of course, an extra day off  from work.  But Memorial Day has a much more significant meaning that often gets lost in the summer barbecues and celebrations and the Memorial Day sales at local stores and car dealerships.  Memorial Day is a day to remember those that have served and sacrificed for our country.

There is no clear indication as to where and when the tradition that became Memorial Day began, but it is believed that it started in the late 1860’s as a way for Americans to pay tribute to the fallen soldiers of the Civil War. The Civil War claimed more lives than any conflict in US History, and required the establishment of the country’s first national cemetary.  In the early years of this tradition, people would pay tribute by decorating the graves of fallen soldiers with flowers and reciting prayers.

On May 5, 1862 General John A. Logan, leader of an organization for Northern Civil War Veterans, called for a national day of remembrance in May, and Decoration Day was designated on May 30 “for the purpose of  strewing with flowers or otherwise decorating  the graves of comrades who died in defense of their country during the late rebellion, and whose bodies now lie in almost every city, village and hamlet churchyard in the land”.  It was not until after World War I that the holiday was expanded to honor all those who had made the ultimate sacrifice for our country.

May 30 was celebrated as Decoration Day until 1968 when Congress passed the Uniform Monday Holiday Act, which established Memorial Day as the last Monday in May in order to create a three day weekend for federal employees.  This change went into effect in 1971 and also designated Memorial Day as a federal holiday.

It is believed that over one million Americans have died while serving our country in times of war since the American Revolutionary War.  Chances are that someone you know, or someone in your family, even someone from generations upon generations ago,  lost their lives while fighting wars for our country and our freedom.

Enjoy this Memorial Day weekend. Celebrate with friends and family at backyard barbecues and pool parties. Welcome the beginning of Summer, and enjoy an extra day off from work.  But while you’re enjoying the weekend, take a moment to reflect on what this holiday is truly about…honoring our fallen heroes.  Share the meaning of Memorial Day with your children.  If you know someone currently serving in the Armed Forces, thank them for their service and sacrifice for our country.  Thank their families, because they make sacrifice and endure hardship when their loved ones must fight for our freedom.  This is the meaning of Memorial Day. 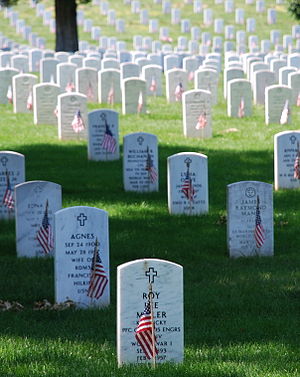