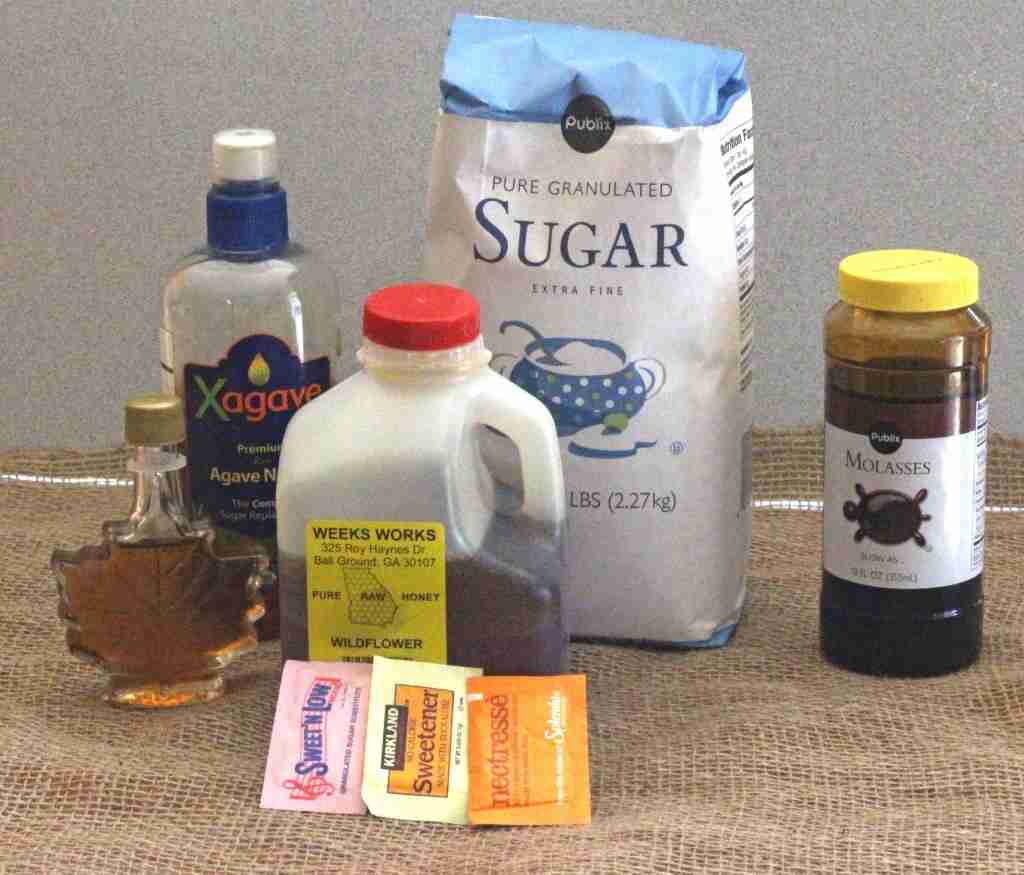 Almost everyone likes sweets.  And, honestly I think we would be better off without sugars, syrups, or artificial sweeteners, but I don’t know that many people who are going to give us all sweet foods all the time, so you have to decide what is right for you.  A lot of people out there seem to want to criticize others for their sweetener choice, but the bottom line is that no one sweetener is right for everyone – well except maybe no sweetener at all, but like I said before, most of us are going to eat something sweet occasionally. So, lets look at our choices (keeping in mind that any sweetener you choose should be enjoyed in moderation):

Sugar – This is the obvious choice.  People think of it is as natural though it does undergo processing.  While sugar is not known to be carcinogenic, it can increase risk of obesity which can increase the risk of cancer and diabetes.  It is also linked to inflammation, which may increase the risk of many diseases including heart disease, and of course, tooth decay.  And, if you have diabetes, sugar can raise your blood sugar to dangerous levels.  So, while sugar is not considered an artificial sweetener, it certainly isn’t good for you.  It should definitely be avoided as much as possible if you need to lose weight or have diabetes.  But, if you don’t need to lose weight and don’t have blood sugar issues, then this sweetener may be for you.

Sucralose – Sucralose, which you may know as Splenda, is an artificial sweetener that tastes basically like sugar, and can be baked with, and does not affect blood sugar.  The FDA has approved it, and their is apparently no conclusive evidence that it can harm you, but still reports of side effects are definitely out there.  And, sucralose is relatively new, so we don’t know what it might do to us long term.  It was accidentally discovered while scientists were working on pesticides.  Whether or not that is relevant to its safety, it certainly make you wonder.  If you are willing to take the risk of possible unknown side affects and need to reduce calories or need to avoid sugar due to diabetes, and want to cook with your sweetener, this might be the sweetener for you.

Aspartame – Aspartame, which you may know as Equal also tastes basically like sugar and does not have any affect on blood sugar, but it breaks down when cooked.  Like sucralose, aspartame is FDA approved and there is no hard evidence that it is harmful, but reports of side affects are at least as common if not more common than the reports of side affects with sucralose.  Again, you have to weigh those reports with government evidence and decide if you are willing to take the risk.  If you are, and you are only going to be adding it to uncooked foods or beverages or drinking artificially sweetened sodas and need to cut calories or have diabetes, then aspartame might be for you.  I will point out though that soda in general has received a lot of negative attention both in the sweetened and artificially sweetened varieties because many people who drink soda drink A  LOT of it.  So, it might not be a good idea to drink too much of any soda.

Sugar Alcohols – Sugar alcohols have lots of names such as xylitol, maltitol, and other words most of which end in ol.   They are found in many low-carb foods, beverages, gums, candies, and ice creams. They are also found as an ingredient in mixed ingredient sweeteners such as Truvia and Nectresse.  Sugar alcohols taste very much like sugar, can be heated, and do not affect blood sugar, but they can cause gastrointestinal distress in the form of diarrhea, gas, bloating etc.  They are supposed to be safe if you don’t mind the side affects, so if the side affects are not too bad, and you need to reduce calories or have diabetes then this may be the sweetener for you.

Stevia – Stevia gets a lot of good publicity for being all natural, and you can cook with it. But it has not been FDA approved as a sweetener because of health concerns.  There are reports of side affects as well as studies that could link it to fertility issues and cancer.  It also may lower blood pressure.  That might be good for some of you out there, but some people already have low blood pressure, so that is not always good.  Many people also find it bitter and just don’t enjoy it.  Again, these risks have not been proven, so it is up to you whether or not you want to take them.  But if you are willing and enjoy it, and especially if you need to reduce calories or are diabetic, then this may be the sweetener for you.

What about other natural sweeteners like honey, agave syrup, maple syrup, and molasses?  It is true that some of these are all natural, but be careful because some are processed.  While honey may have health benefits and molasses may contain iron, as far as calories and blood sugar goes, your body pretty much treats these like sugar.  So, if you need to reduce calories or are diabetic, it is going to better to avoid these. But, if your not, these might be great sweeteners for you.

As you can see, no one sweetener is right for everyone.  It all depends on your individual health situation and how much risk you are willing to take.

In my family, we avoid sugar alcohols due to stomach upset and stevia due to blood pressure issues.  We also try to limit sugar and other sweeteners due to my husband’s Type II diabetes, and my huge diabetes risk factors.  Even though you see sweets on my blog regularly, we try to limit them to when there is company coming to help us eat them, or we know we can take them to work or other gatherings to get them out of house as quickly as possible.  We do use sucralose and have determined that with our other issues, it is probably the best choice for when we just feel like we have to satisfy our sweet tooth.  Which sweeteners are you most comfortable with?

3 Fat Chicks on a Diet