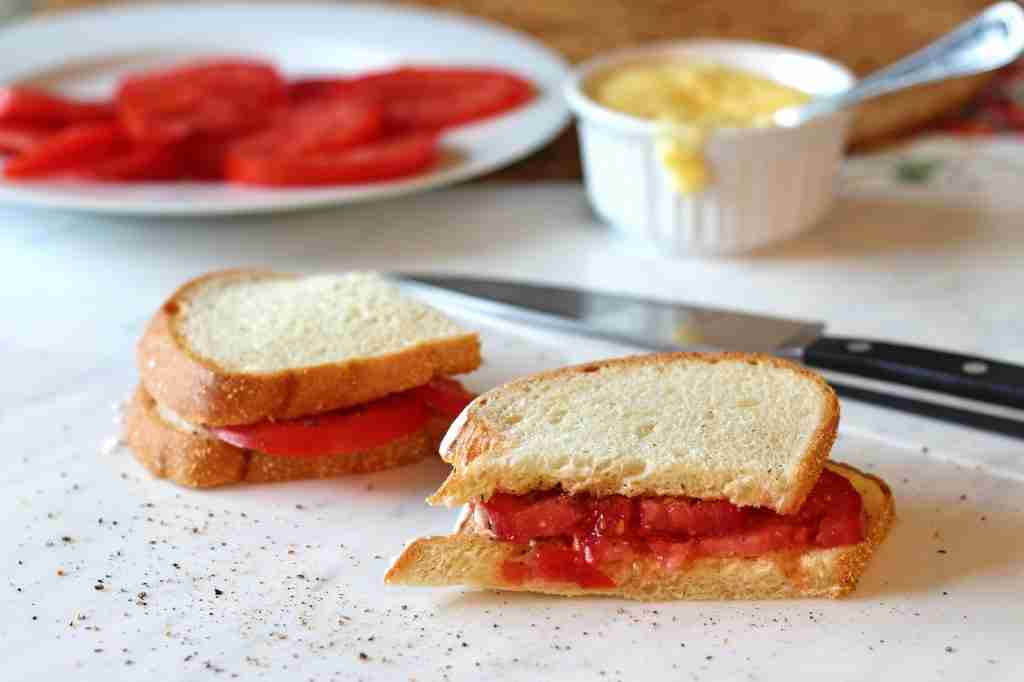 The tomato sandwich is a quintessential summertime favorite.  But, it is also a sandwich fraught with controversy.  About the only two things everyone seems to agree on is the tomato and nothing but tomato.  It must be home grown or at least local and ripened on the vine.  I must confess that the tomatoes pictured were not home grown as ours are still green, but they were bought from a farm near by.  And, this is not the place for herbs, cheese, lettuce, bacon, etc.  All of those are good with tomato, but they are just not a traditional tomato sandwich.

First, is it even a southern food?  Well, most southerners will be quick to tell you it is, but there will always be others that say it is not.  I mean, they grow tomatoes all over the United States and certainly we are not the only ones to put them in a sandwich without anything else – well, except mayonnaise and salt and pepper.  So, I will ask you.  Do you eat tomato sandwiches?  If so, where are you from?

Then, there is the bread.  Some say that a tomato sandwich must be made on white loaf bread.  Others, claim we have evolved away from this and that we should use our favorite instead of the old pasty white stuff.  Personally, I think anything whole grain interferes with the taste of the tomato, but I don’t like white loaf bread, so I usually buy some white flour bakery bread such as French or Italian or even make my own.  The goal is something a little sturdier and tastier than white loaf bread, but light enough in flavor to let the tomatoes shine.  Again, I will ask your opinion.  What kind of bread do you use in your tomato sandwiches?

Nothing can start an argument better than the question of which mayonnaise to use.  Everyone seems to have a favorite.  Probably, the most common for tomato sandwiches in the south is Dukes, but you see those that prefer Hellmanns and Kraft, and even Miracle Whip salad dressing.  I’m in favor of Hellmanns.  I’ve never liked Dukes which is apparently some sort of sacrilege, and Miracle Whip was one of those things we just didn’t eat when I was growing up.  Like a lot of sweet things, I was told that it was something northerners ate – as if being from the north was bad in some way.  I am glad times have changed, and people no longer feel that being from the north is a negative, but I must say I have never developed a liking for Miracle Whip.  If you want to be really picky about mayonnaise, I suggest you make your own.  It is the only way to make it taste just the way you want it.  What is is your favorite store bought mayonnaise?

And speaking of homemade mayonnaise, I have a recipe for you.  Unlike most recipes, I suggest adding the seasoning last and tasting it as you go, so that you get it just right for you.  Because of this, I also recommend refrigerating it for at least an hour before eating to let the flavors marry, sugar and salt dissolve well, etc.  Of course, it is still pretty good when it is just made, if you are in a hurry.  I adapted this recipe from this one by Alton Brown via The Food Network.

Please note that eating raw eggs can put you at risk for salmonella.  I used pasteurized eggs to eliminate or at least reduce this risk.