Today we welcome a guest article from Cuisine Solutions about Sous-Vide Cooking.  If you are like me, you have never heard of this.  It is a very interesting method using vaccuum sealing and water.  You don’t want to miss this great read!

With Father’s Day just around the corner, it’s always good to think up meals just for Dad. While many fathers aren’t always conventional meat and potatoes types (Dad could be a vegan, or maybe just a pescatarian), we all have at least one male relative who loves to grill. Our dads may have taught us the meaning of many words – responsibility, trust, honor. But on a lighter note, Dad may have been the person to teach us exactly what ‘porterhouse’ meant as well. 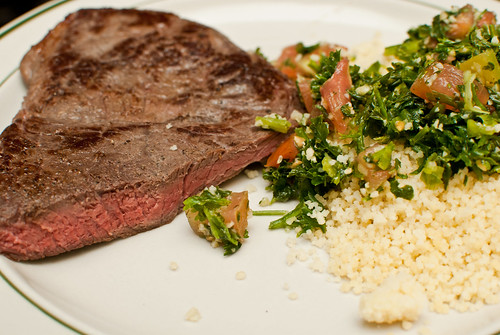 Grilling can be pretty exhausting though, and if Dad’s going to be kicking back on Father’s Day, the guy who usually mans the barbecue will be off duty. So, what about other ways of preparing meat?

It may sound like an unconventional proposal, but cooking sous-vide meals is an excellent way to provide the highest quality steak or beef. A relatively modern style of food preparation, sous-vide was originally pioneered in the 1970s as a means of preserving meat without losing texture or flavor. More traditional styles of preservation such as freezing can rob meat of much of its character. Sous-vide preparation was invented for the purpose of sidestepping many of the flavor-degrading aspects of traditional preparation while still allowing freshness to be retained.

Sous-vide meals are typically sealed beforehand in their sauces, and with beef products this allows meats ranging from short rib to top sirloin to immerse in their flavors long before they’re actually unsealed. Once opened, sous-vide preparations are typically simmered in a slot cooker or special oven, and allow the beef to further develop its innate flavor. Tastes that were enhanced (not diminished) by the special sealing process only build right before the meat is served.

There are many ways to bring sous-vide meat preparations to the table- whether plain or with culinary flourishes.  Dishes like Beef Provencal can be sealed beforehand with the traditional combination of balsamic vinaigrette and sun-dried tomatoes, and served as a full meal. Something more back-to-basics like beef short ribs can be immersed in their own juices and served as is once prepared. To go back to the meat and potatoes drawing board, even beef stews can be prepared in the sous-vide style, with beef sealed with their accompanying vegetables or roots before being slow-cooked to perfection afterward.

It’s Father’s Day, and with Dad probably the last one around the house who wants to cook, you’ve got the room to get creative while providing something he (and most likely, the rest of the family) will love.