I’ve been living in Arizona for almost five years, and in that time I’ve created a long list of restaurants to try.  Unfortunately, I haven’t even made a dent in my list because there are so many great restaurants in Arizona!

One restaurant that has been on my foodie bucket list for a long time is a place called Barrio Cafe.   Barrio Cafe regularly makes the list of best restaurants in Phoenix by Phoenix Magazine, AZ Central and more.  Founded in 2002 by Wendy Gruber and Chef Silvana Salcido Esparza, Barrio Cafe features modern Mexican cuisine with a variety of amazing menu items. 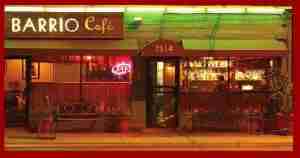 I finally got to cross Barrio Cafe off of my foodie bucket list when I went with some friends for happy hour and dinner, and it was truly a culinary treat.  Barrio Cafe is located in Downtown Phoenix, and to be honest, it isn’t the best area in town.  My friends and I were a little apprehensive at first, but believe me, the food was worth the visit to this part of town.

Our server was fantastic and made recommendations for us since it was our first time dining at Barrio.  First, he recommended the Flaca Margarita, which he assured us was the best margarita on the menu.  I questioned the validity of this recommendation since it was actually a skinny margarita, but he was right, because it was the best margarita I’ve had in awhile…skinny or not.  I even tried one of the other margaritas on the menu to see if he was telling the truth when he recommended the Flaca, and while it was a good margarita, the Flaca Margarita was by far a better drink.

Next it was on to the appetizers, and we tried the Kuali de Camaron.   My friend described it best when she said this appetizer was “life changing”.  It was creamy, a little spicy with perfectly sauteed shrimp and was an amazing combination of flavors.  I would highly recommend this appetizer if you visit Barrio Cafe.

Since there were three of us for dinner, we decided to order three different entrees so we could try them all.  My friend ordered the Pescada Del Mar, which was topped with shrimp, scallops and and a white wine sauce.  I ordered  the de mi Tita, which is a filet mignon topped with crab and queso de cabra melange, and a red wine reduction.  Our server recommended the chef’s specialty, which is the Chiles en Nogada, but we decided to try something more similar to an authentic dish for our third choice, so my other friend chose the Enchiladas Suiza, which is a Mexico City style chicken stuffed enchilada.

My friends and I argued throughout the  entire  meal about which entree was our favorite, because they were all amazing.  The filet on the de mi Tita was tender and flavorful and I literally could have drank the reduction sauce.  The  Pescada Del Mar white wine cream sauce was delightful, and although the Enchiladas Suizas was a more traditional dish, we ate the whole thing because it was so delicious.

Barrio Cafe serves unique and flavorful drinks, appetizers and entrees, and while it isn’t the traditional Mexican fare you might be used to, it’s a wonderful Mexican cuisine that I would highly recommend; don’t let the location prevent you from trying one of the best restaurants in Phoenix.