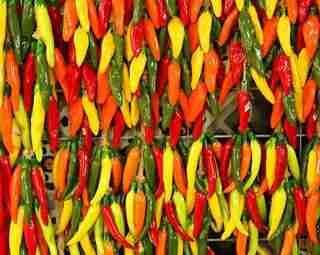 Pasilla chile peppers also known as Poblano or Ancho are long and green when fresh. These hot peppers are often stuffed with cheese and deep fried. This type of pepper turns brown when dried. Many hot peppers are smoked not only to preserve them but to change the flavor. Smoked Poblano are used with an adobo tomato sauce and canned to produce what we think of as chipotle peppers.
The heat of hot peppers vary greatly according to their size and origin. The Scoville Scale was invented to test the amount of capsaicin which determined its ranking on a heat scale. A lot of factors go into how much heat a mature pepper radiates:where it is grown, weather, age, etc.  Because of these variables exact amounts are not calculable.  If you like heat, you know what you can tolerate.