Okra is one of those foods people typically think of as odd and southern.  It really isn’t southern at all, it is African.  It was brought here by African slaves and called gumbo.  Today we think of gumbo as a Creole or Cajun stew (though Creole gumbo and Cajun gumbo are slightly different), but it is the okra in the gumbo that thickens it.  Many people are turned off by the gooey liquid secreted by okra as it cooks, but when it mixes in with the other liquids in a soup or stew, it is unrecognizable and adds a thickness to the dish.  Now, growing up in the south, I have seen people eat it plain and boiled, but I have never liked it that way because it is kind of slimy.  The great news is that if you cook it certain ways, okra is not slimy at all!  It is great fried, grilled, or pickled.

I have grilled okra on many occasions by skewering it, brushing it lightly with oil, sprinkling it with a little salt and grilling until tender, but my favorite way to eat okra is fried.  It is crunchy and salty and makes a wonderful side dish or even a snack.  I could eat a ton of it just like popcorn. 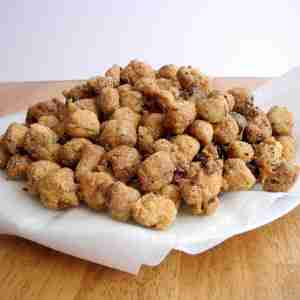 Pour the buttermilk over the okra in a bowl.  Stir to mix well.  You just want to coat the okra, you don’t want it floating in buttermilk.  If you put too much, you can always drain it a little.  After you stir the mixture, it should look very sticky and slimy.  Combine the remaining ingredients in a paper bag.  If you don’t have a paper bag, you can use plastic.  Put the okra in the bag and shake it.  If you have a lot of okra, you may need to do this in batches.  I would not do more than two cups at a time.  And, you will need a new cornmeal mixture each time, so divide that out accordingly.  Heat about one inch of oil in a large heavy frying pan or dutch oven over medium high heat.  When oil is hot, fry okra in the pan in batches until golden brown.  You don’t want to overcrowd it.  There should be a little space between each piece.  The number of batches you will need to fry depends on the size of your pan and the amount of okra you have.