It has been 56 years today that Laura Ingalls Wilder passed away, but  her life andstories are still alive in many hearts.   Her stories have been read by many girls and boys and even I am sure re-read by many adult.

Laura was born on February 7, 1867 in a little house in the big woods near Pepin Wisconsin. Laura and her family traveled west living also in Kansas, Minnesota, Iowa and North Dakota. It was in Dakota that she meet and married Almanzo Wilder. Laura passed away in the Ozarks of Missouri, 3 days after her 90th on February 10, 1957. Her stories of her herself and family will live on in all her reader’s hearts.
Along with her parents, Laura lived with her 3 sister, Mary, Carrie (Caroline) and Grace. She also had a brother Freddy who died as a small infant. Almanzo and Laura were blessed with one daughter, Rose. Rose was the person that inspired Laura to write her stories down for others to read. They also had a son but he died shortly after birth.
Laura’s first book ‘A Little house in the Big Woods’ was published in 1931. The title of this book started out as ‘When Grandma Was a Little Girl’. Since then the books have been in continual printing and have been translated into 40 languages. The books have also been written in Braille. She started to write her books after Ma’s and Mary’s death at the age of 63 and was 76 when she wrote her last book.

I grew up reading the Little House series and have read them more then once.  I have also had the opportunity to visit a couple of the places that Laura lived. I have been to Pepin Wisconsin and stood on the land that were the story of the little house on the big woods took place. Although the house isn’t the original house but a recreation, I felt that I was there at that time Mary, Laura and her parent lived there.

The Little House in the Big Woods
picture credit: A mother, A daughter and 100 books

The second place I visited was Maple Walnut, MN where the story ‘On the Banks of Plum Creek’ came alive.  I was able to visit the site of where family lived in the dugout of Plum Creek. Although this is private land, the owners still allow visitors to this area. There are signs to show you how to get to the dugout. Plum Creek is also the place where Laura’s brother was born and passed away. Mary got very sick here and lost her vision. 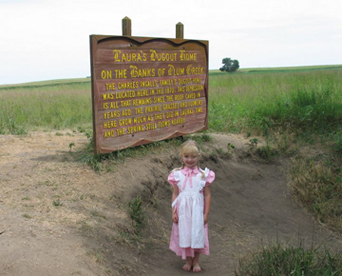 On my bucket list is to visit all the places where Laura lived but for now I will just dream about these places as I read her books, as I am sure I will read them again.  I do have the whole series including Farmer Boy which is written about Almanzo’s childhood. She also wrote a book called the The First Three Years and A Year of Grace but it was not published until after her death. It was published under the title of The First Four Years.
Laura Ingalls Wilder’s books are a wonderful read for any age. They also make great gifts and I have bought them for my nieces.

Have you read any of her books and which one is your favorite?