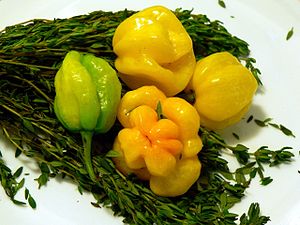 Jamaican Jerk Seasoning is described as “sweet heat”. Black and red peppers are combined with warm spices to draw out the best the Islands have to offer. In jerk cooking a dry rub is used on meat or the spices are made into a paste as a wet marinade. The term “jerk” refers to the process that makes meat into the popular jerky that was easy to transport and store. Chicken and pork are favorite choices for dishes but fish, seafood and vegetables are also used.  Allspice and peppers, especially Scotch Bonnet give it its kick.
Here’s a list of spices used in combination for jerk seasoning. Like any regional blend the spices will vary slightly. The most combo has allspice, thyme and Scotch Bonnet pepper as its base.
garlic powder
cayenne pepper
onion powder
dried thyme
dried parsley
sugar
salt
paprika
allspice
black pepper
crushed red pepper
nutmeg
cinnamon