Today, I am starting a two part series on flour.  This week we are just going to talk about the differences in all-purpose and self-rising flour.  Next week, we will talk about other types of flour such as cake, bread, and  pastry as well as alternative flours.

On my blog From Calculus to Cupcakes, I occasionally post a recipe that calls for self-rising flour.  This is almost always an old recipe that has been passed down because I rarely see it in new recipes.  It was brought to my attention that self-rising flour is primarily a southern thing, and that it is not even available everywhere.  I had heard before that it was a southern thing, but I assumed that it was actually available other places, but I was wrong.  Basically, it is what southerners often use to make biscuits, pancakes, muffins, etc., but not much else.  The generally accepted conversion is to add 1 1/4 teaspoons of baking powder and 1/4 teaspoon of salt.

I decided to do a side-by-side comparison of self-rising and all-purpose with leavening added.  To be fair, I have to point out that I used two different brands of flour.  I always use White Lily self-rising, which has a slightly lower protein content than most flour making it almost like cake flour.  I will talk more about the protein in flour next week, but this lower protein content probably contributes to its ability to rise so well.  I almost went out and bought White Lily all-purpose for this experiment, but decided not to for two reasons.  First, if I were making a substitution, I would use what I had in my kitchen, which was Pillsbury’s unbleached all-purpose.  And second, White Lily is a southern brand (from Tennessee), and I think that if you live somewhere that self-rising flour is not available, you probably also live somewhere that White Lily is not available.  Still, I am curious, so I might have to try that in the future.

The results were not what I expected.  I fully expected the biscuits I made to turn out the same.  After all, self-rising flour is just all-purpose with the leavening added.  It shouldn’t make a difference if you added it yourself, right?  Well, it did make a noticeable difference.  That being said, both biscuits were good, but they were not the same.  I made cream biscuits for this experiment because they rise well, and that is what I wanted to show.  I did need an extra tablespoon of cream for the all-purpose flour biscuits, so the usual substitution isn’t perfect.

The photo at the top shows the all-purpose biscuit with added baking soda and salt on the left and the self-rising biscuit on the right.  As you can see, the self rising biscuit rose much higher – maybe too high as it a bit lopsided and split open. 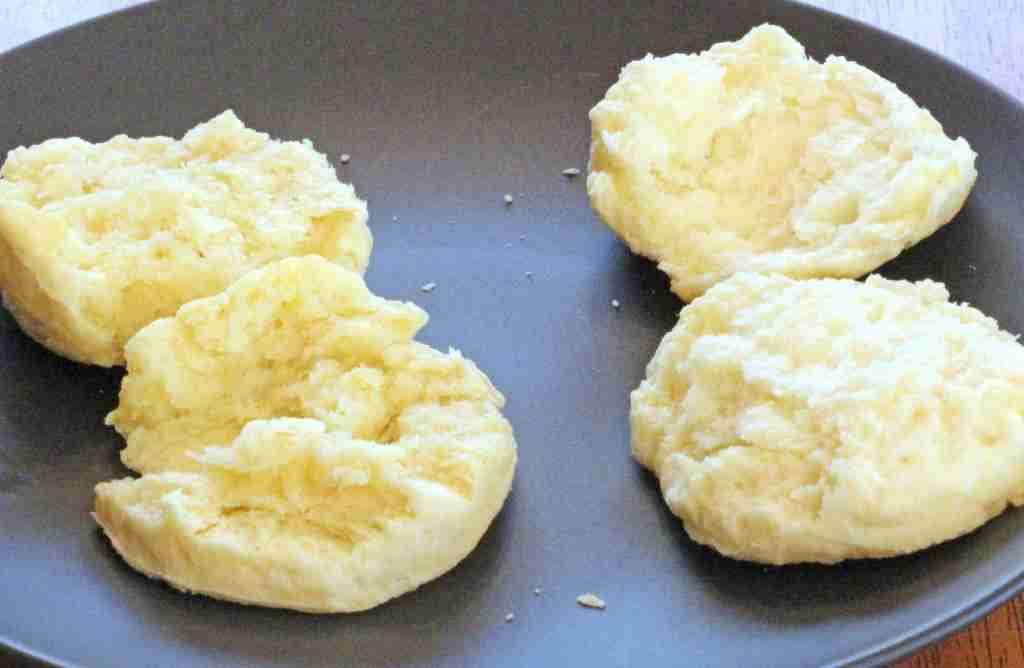 And finally, how do they taste?  The self-rising biscuit was saltier than the all-purpose.  Not enough that you would notice say from one day to the next, but it was definitely noticeable when taking a bite of one and then the other.  Predictably, I liked the self-rising biscuit better, but that is what I am used to.  My husband grew up eating biscuits more like the all-purpose and preferred it.  My son also preferred the all-purpose saying that it seemed moister.  I think it all depends on your preference and the recipe you are using.  I might prefer the all-purpose for buttermilk biscuits for example because they are not meant to be the light airy biscuits that the cream are.  So, it is really up to you.  Just remember that I needed a bit more cream for the all-purpose, so you might need to adjust you liquid ingredients a little if you are converting self-rising to all-purpose from a recipe.