About six months ago, I agreed to complete the Color Vibe 5K Run in Arizona with my cousin.  I thought it would be a fun event, and I would be able to leisurely stroll the 5K while getting blasted with colored powder.

Then my cousin proceeded to tell me that she had been training for a half marathon and had just finished a 7 mile run. SEVEN MILES?  Are you kidding me?! Suddenly anxiety set in…what the heck had I just gotten myself into?!

I realized that two outcomes were likely to occur.  Outcome One: my cousin walks with me because she feels bad leaving me in the dust because she can run 3.3 miles like it’s nothing, and is bored out of her mind the entire time. Outcome Two: she leaves me in the dust to run and I walk the long (3.3) mile by myself.  I was pretty sure my cousin wouldn’t leave me in the dust, but I didn’t particularly relish either option.

So I did what any person attempting to avoid embarrassment in a situation like this might do…I decided to try to get in shape to run with my cousin.  I had a little less than two months until the race, so I figured that would give me enough time to get from 0.0 to 3.3.

I knew there was no way I would be able to take off running, and I’ve never trained for a race before, but a friend recommended trying an app for my phone called Couch to 5K.  The C25K program involves a steady increase in running time over eight weeks.  The app got good reviews and it seemed to be a pretty easy program, so I decided to give it a try.

If you’ve read my previous article titled, “Why I Hate Working Out“, you’ll know that I’ve had some difficulty finding a workout that I enjoy doing enough to want to work out on a regular basis.  And I’ve tried running before.  I ran on a treadmill and hated every minute of it.  It was boring and monotonous and made me feel like I was a hamster on a wheel.  But the Color Vibe would be outdoors, so I needed to run outside to get ready for the race. I had never really done outdoor running, butI was sure it wouldn’t be any different than running on a treadmill.  After all, running is running, no matter where you are.

Here is my recount of the first few days of running on the C25K plan:

I literally ran for a total of maybe 8 minutes, but I feel like I ran a marathon.  Not to mention my feet hurt.  And my ankles hurt.  And my legs hurt.  Maybe running with old shoes wasn’t such a good idea.  Maybe I’m just terribly out of shape.  Maybe both.

Another set of 60 second running intervals.   I’m sore, but I’m going to do it.  I really want to be able to keep up with my cousin at this run.  I’m not sure how likely that is to happen, considering 45 seconds of running at a time is almost unbearable.  But hey, 30 seconds was my breaking point last time, so I’ve made improvement.

I’m feeling a lot better but my feet and ankles are KILLING me.  I think I’d better invest in good running shoes or I’m not going to be able to handle this.   But the good news is, I was able to run a full 60 seconds without being exhausted!  I know it’s not much, but I’m better than I was a week ago!  And the weird thing is, I’m actually looking forward to running. I kind of like running outside; checking out the scenery and enjoying the Arizona weather.   I’m excited about running, and I’m excited to reach my 3.3 goal.  I’ve never been excited to do any kind of workout.  Ever.

What took place after those first few days was 7 more weeks of increasing my running time a little more each week.  And each week it got a little easier.  And I got a little faster.  And I ran a little further.  This just gave me incentive to keep running, and before I knew it I was running a mile at a time without stopping.  Considering that running for a minute was nearly impossible in the beginning, being able to run a full mile was a great accomplishment to me.

I wasn’t up to 3.3 by race day, but I figured I’d be able to push myself to run the whole thing.  I got off to a great start and kept pace with my marathon running cousin.  But after about 1.5 miles, I couldn’t keep running.  I was out of breath and couldn’t keep pace.  I had to stop to walk.  I was so disappointed, because I really wanted to reach my goal, and I didn’t want my cousin to have to walk with me and be bored, or worse yet, leave me in the dust.  But she didn’t leave me in the dust, and she wasn’t bored (or if she was she faked it).  She walked with me and encouraged me and congratulated me for being able to run 1.5 miles straight.  She told me I’d be up to 3.3 in no time, I just needed to keep at it.  And although I was disappointed, I was more motivated than ever to reach my goal.

And I did reach that goal.  A month later I ran my first 5K and it felt amazing.  And that accomplishment made me want to keep running.  Not because I want to lose weight or look better (although that’s been a nice extra benefit), but because I’ve truly found something I enjoy doing enough to want to do it on a regular basis.  I never in a million years thought that “something” would be running.  Now I’m training for a 10K and my goal is to run a 1/2 marathon by the end of 2014.   Who knew that a silly 5K fun run would more or less change my life.

With the arrival of the New Year, many people are resolving to get in shape, lose weight, exercise more.  If you’re thinking of taking up running, here are a few helpful tips for getting started:

I.  INVEST IN A GOOD PAIR OF RUNNING SHOES.  I’m typing that in all caps because I would scream it if I could.  I cannot emphasize enough the importance of good running shoes.  And I’m not talking about box store running shoes.  Go to a running shoe store and get fitted for a good pair of shoes.  Yes, they’re expensive, but they’re worth every penny.  I initially started out with my old shoes, then bought a pair of shoes at a box shoe store, and I ended up with bursitis because my shoes weren’t fitted right.  It took weeks to get over that pain, even after I got the right shoes.  If I’d had the right shoes to begin with, I wouldn’t have had any problems.

II. Start Slow.  If you haven’t been running before or in awhile, don’t start off by trying to run a mile or more at a time.  That will only make you sore, tired, and/or discouraged.  I highly recommend the Couch to 5K plan or something similar.  This plan starts off with small increments of running and increases each week until you get to the full 5K.

IV.  Get support.  Get a running buddy if you can.  If not, there are a ton of great running groups and bloggers online, and you may be able to find a running group in your neighborhood.  When you go to buy those running shoes, ask the salesperson if they have information on local running groups; these are just people who run together on a regular basis.  Having support and resources keeps you motivated.

Here are a few of the online resources and blogs I like:

How My World Runs

I Love to Run

I shared this story with the hopes of motivating others who might want to give running a try, but aren’t sure how to get from 0.0 to their running goal.    If you are going to give it a try, I hope you find the tips and resources helpful.

And one more thing- to my cousin who helped me get started: You inspired my journey to begin.  Thanks for the motivation and encouragement, and for being my running buddy for crazy running events! 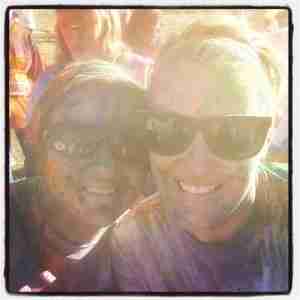 Stay tuned, as I’ll be posting more tips and suggestions for runners and running!