After I was married in Togo, West Africa, I had the opportunity to do most of my own cooking and also watch my in-laws cook. I stayed in Togo for six weeks after getting married there.  Most homes or at least most of them that I visited did not have electricity or if they did, their electric was not used for refrigerators or elective stoves.

The apartment that we lived in after getting married, did have a refrigerator but as the electricity would be very sketchy.  We were not sure if the electricity would be shut off by the city for long periods of time, so we would buy our meats and perishable items  every day.   I was able to find a yogurt that didn’t need to be kept cold.. for that I was very excited. Our eggs were left out on the countertop and they were sold by the dozen so even though we ate eggs just about every day, they lasted for at least 4 -5 days.  The stove that we used was gas camp stove and had two burners but as I only had one pot, I didn’t need both burners.  For the 6 weeks, I had one pot, one spoon, one knife and a spatula and I made due.

My in-laws have no electricity at their home in the village and my mother-in-law has a kitchen outside of her house and she cooks over an open fire.  When I first visited their home, they had no running water so water needed to be carried in.  We were able to get running water piped to their home, so that is one less thing that they need to do.  Most homes that I was at had only a gas burner.  I really wish that I had taken a picture of this but will try to describe it for you.  Their stove was a propane tank and at the top of the tank was a device that was a type of burner.  Can you envision cooking like this, every day?  Most of the time the propane tank was outside on the ground.  They did have a small stool that they would sit on as a lot  of the food preparation and cooking is done close to the ground.

Envision cooking either outside or possible inside in a kitchen with no windows and very little airflow over an open fire or even a propane burner when temperatures are at least 100 degrees F (37 degrees C) and no air conditioning.  I was hot every day I cooked. 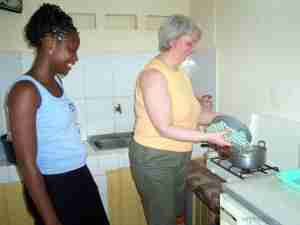 cooking in my apartment kitchen on my camp  stove. 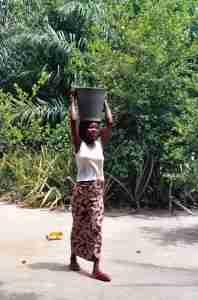 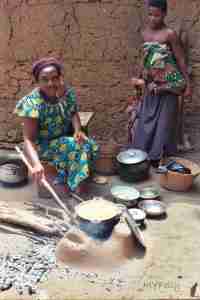 cooking outside on a open fire 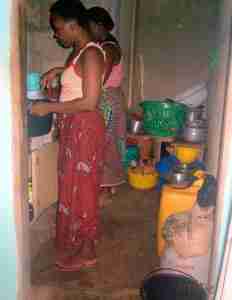 preparing food in the kitchen 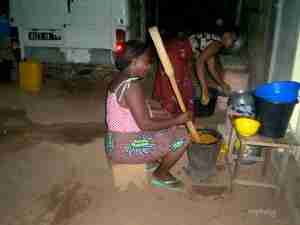 Cooking outside of their apartment. Here you can see how they sit on a small stool while cooking or preparing food.

Over the course of the next few weeks, I will continue my write ups of how I cooked in Africa while there or watched others cook our meals.