In the last posting I did of Cooking in Africa, I talked about the use of a mortar and pestle for grinding or mashing foods like spices, and tomatoes.  In Togo there is also a large mortar and pestle that is used to pound fufu which is a staple food in Togo and many other African countries. 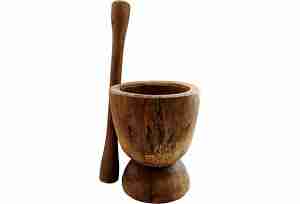 An African Mortar and Pestle

Most mortar and pestles that are used or at least the ones that I have seen were made of wood.  It if very common to hear the rhythmic pounding of fufu everywhere you go.  Fufu can be pounded by one to several people depending on what quantity of fufu is needed.  In a family it is pounded by one to two people but in the “chop” shops which are like a fast food outlet or a restaurant, fufu can be pounded by upto six people.  It is amazing how they can be so rhythmic and not seem to miss a beat.

We do have a mortar and pestle in our house and when we are able to get African yams or cassava, we pound fufu.  I leave the pounding  up to my husband as it is very hard work and I haven’t got the rhythm down, I end up hitting the side of the mortar more often then not. 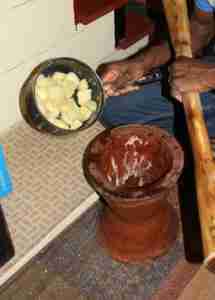 The mortar and pestle that we use in our home

A smaller size mortar and pestle

In my next article I will show you how to make fufu in the mortar pestle and will have more pictures.