After moving to the United States I have been often asked…what do Canadians eat?  My first thought is the same as you..Ok, that maybe a slight lie as my first thought is usually something outrageous to say… like beaver, but then again that is true because we do like our Beaver Tails ( a popular dessert)…

Canadian food is a lot like American food.  Many foods have been brought from other  countries and it is a cuisine of cuisines, a smorgasbord of tastes.  To begin with Canadian food was influenced by the First Nations, French and English and over the years with tastes from many other countries as people have immigrated.

To get my information, I went to my Facebook friends and families and asked what they thought were Canadian foods and what foods they missed when they left Canada.  Over the course of the next few weeks I will be giving you some different types of Canadian foods with recipes and the history behind these foods.  Today I am going to talk about the Canadian Desserts… because who doesn’t like sweets and desserts?

The Canadian Butter tart is one of the most classic desserts of Canada.  The Canadian Butter tart consists of butter, sugar, syrup and egg mixture in a pastry tart.  Raisins, walnuts or pecans can also be added, with raisins being the most popular.  Butter tarts are similar to French Canadian Sugar Pie or the Pecan Pie that is popular in the United States.    This tart history has been traced back to the 1600’s when French brides where imported to Canada.  They needed to make things that were handy in their larders… which were butter, sugar, syrup and eggs.  Today, Butter tarts are still made in many Canadian kitchens and one of the desserts that most of my friends and family said was truly Canadian.  Here are a couple of links for recipes for butter tarts…. This and That ~ Butter tarts and Hun.. What’s for Dinner.  As you can see by the recipes, Butter tarts can be as distinctive as their bakers. 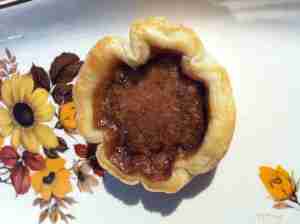 Another almost as equally Canadian dessert is the Nanaimo Bar. This recipe is consists of a chocolate coconut bottom layer,  with a custard flavoured butter icing layer, covered with melted chocolate….   Yes, Canadians say icing sugar and not powdered sugar.  This bar is named after a city in British Columbia, Nanaimo.  Although this bar has many layers and steps, it is fairly easy to make and is unbaked, so a great summer treat.  I won’t make you go hunting for this recipe and will post it here for you to enjoy.  To make these bars taste the best you should find Bird’s  custard, but if you can’t find it you can also use custard pudding or vanilla pudding.  The middle layer can also be made with different flavours depending on what you are making them for… peppermint, mocha, peanut butter.  I have also made Nanaimo Bar Cheesecake that is wonderful.. You can go to my blog This and That for the recipe.but